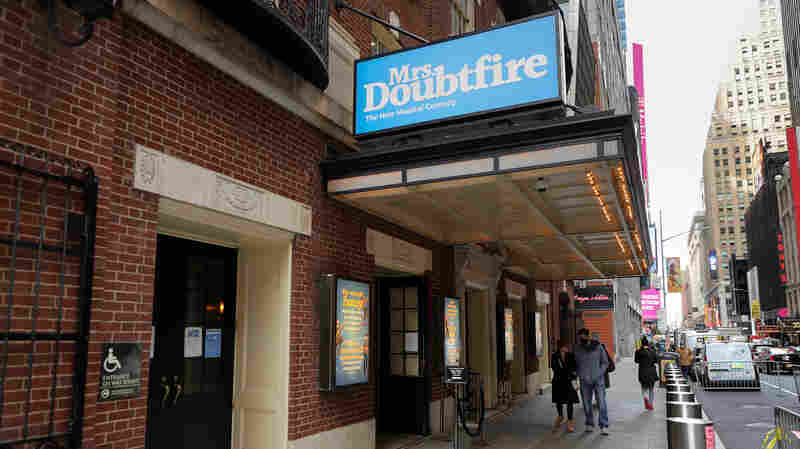 Mrs. Doubtfire is one of the Broadway shows that reopened but then had to shut down for a while after cases of COVID spread among cast and crew. Dia Dipasupil/Getty Images hide caption

Omicron hampers Broadway. Fewer tourists are there for just a score of shows

January 23, 2022 • Tickets may be easier and cheaper to get for the plays that are still open. Some producers reopened until the virus raced through the cast and crew. Future productions are hard to see on the horizon.

Omicron hampers Broadway. Fewer tourists are there for just a score of shows 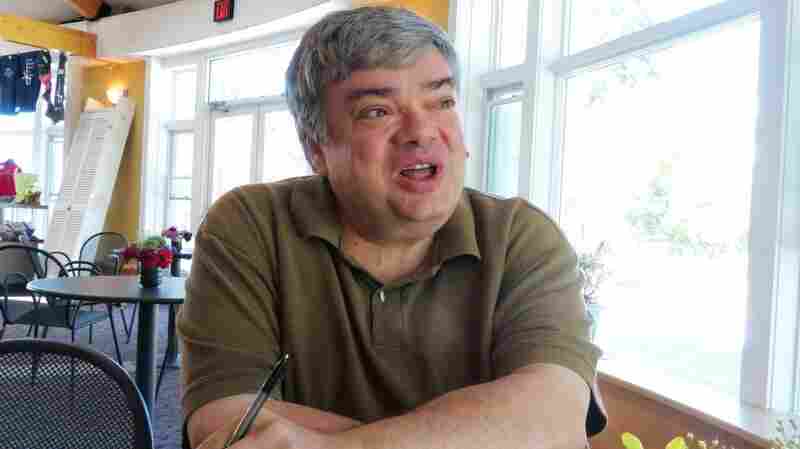 January 15, 2022 • NPR's Scott Simon remembers theater critic and playwright Terry Teachout, who died this week at the age of 65. 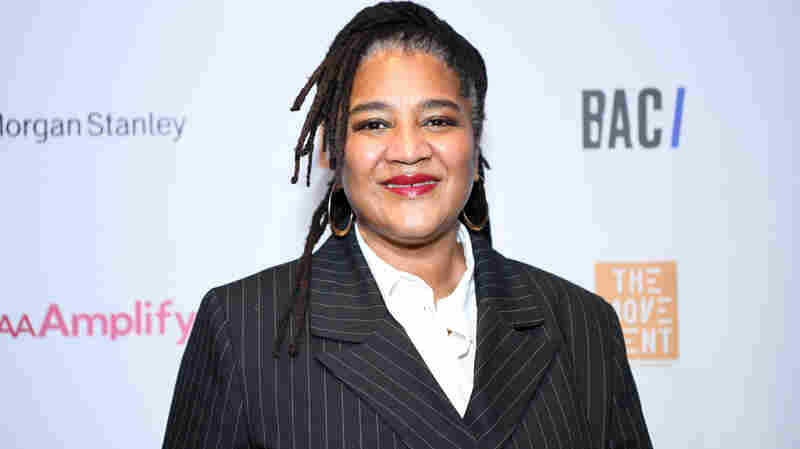 January 14, 2022 • Nottage, the only woman to win the Pulitzer Prize for Drama twice, has a new play on Broadway, an opera at Lincoln Center Theater and a Michael Jackson musical opening soon. 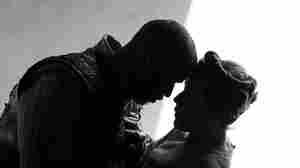 January 14, 2022 • The Tragedy of Macbeth adapts Shakespeare's familiar tale of blood and betrayal, dreamlike daggers and stubborn stains. But its stars Denzel Washington and Frances McDormand are significantly older than the leads usually are, which makes the whole thing hit differently. Directed by Joel Coen, the film fuses black-and-white cinematography with a clean, minimalist production design that underscores the story's theatrical roots. It's now streaming on Apple TV+. 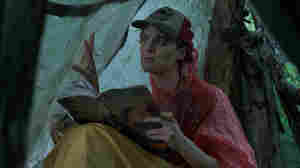 'Station Eleven' offers a home at the end of the world

January 12, 2022 • The HBO Max miniseries Station Eleven begins with a highly contagious and deadly virus wiping out 99 percent of humanity. That might not sound like comfort viewing, but hear us out. The show follows many characters as their individual stories intersect — both in the 100 days after the virus hits, and 20 years later, as civilization attempts to rebuild. Based on Emily St. John Mandel's novel, the series stars Himesh Patel, Mackenzie Davis, Gael García Bernal, Danielle Deadwyler, and Lori Petty.

'Station Eleven' offers a home at the end of the world 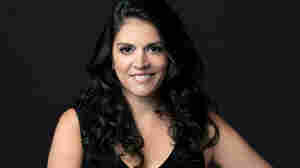 Cecily Strong is putting her personal spin on a celebrated one-woman show at The Shed in New York City this month. Mary Ellen Matthews/NBC hide caption

January 11, 2022 • The 'Saturday Night Live' cast member and 'Schmigadoon!' star performs in "The Search for Signs of Intelligent Life in the Universe," a one-woman show made famous by Lily Tomlin. 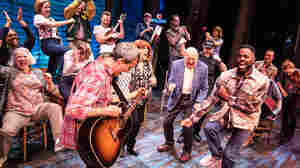 The Broadway cast of Come From Away had to cancel a week's performances before Christmas due to a COVID-19 outbreak. When it returned, eight out of the 12 actors in the show were substitutes. Matthew Murphy/© 2021 "Come From Away" on Broadway hide caption

toggle caption
Matthew Murphy/© 2021 "Come From Away" on Broadway

January 3, 2022 • Breakthrough infections from the omicron variant have been spreading like wildfire among casts and crews, so understudies and swing performers have been helping keep shows afloat. 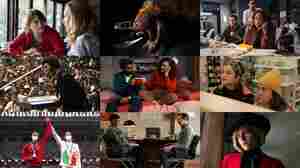 50 wonderful things from 2021: The performances, moments, and laughs we'll remember

December 30, 2021 • NPR pop culture critic Linda Holmes lists highlights from the year, including Ted Lasso, a TikTok dog, a twisty mystery, some great performances, and a moment in a mall. 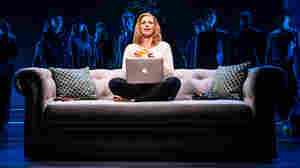 December 21, 2021 • The show, which takes its title from Alanis Morissette's 1995 album, cited the Omicron surge for closing. 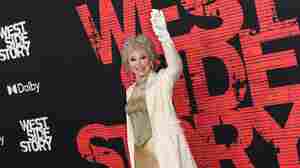 Rita Moreno, whose portrayal of Anita in the 1961 West Side Story earned her an Academy Award for Best Supporting Actress, attends the premiere of the 2021 remake. VALERIE MACON/AFP via Getty Images hide caption

December 19, 2021 • This week, Alt.Latino takes a look at how the original 1961 West Side Story impacted Puerto Ricans growing up in New York. 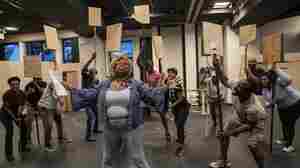 Shola Adewusi (foreground) and the company in rehearsal for Merry Wives. When the show first began its run, the audiences were mostly white. Then, the organization piloted Black theater nights, says the Public Theater's artistic director, Oskar Eustis. "And we had two nights in which the Delacorte was 98 percent Black audiences, 1500 people a night." Joan Marcus/Courtesy of the Public Theater hide caption

Here's how theater directors have reimagined their work during the pandemic

December 11, 2021 • During the height of pandemic closures, three artistic directors spoke about their hopes for what theater would look like when it reopened. More than a year later, we check in to see what's changed.

Here's how theater directors have reimagined their work during the pandemic 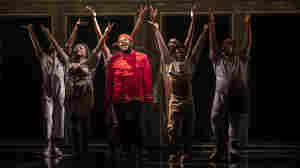 A Pulitzer winner at the worst possible time, 'A Strange Loop' is Broadway-bound

A Pulitzer winner at the worst possible time, 'A Strange Loop' is Broadway-bound 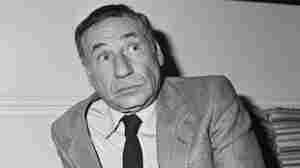 Mel Brooks (shown here in 1984) calls comedy his "delicious refuge" from the world: "I hide in humor and comedy. I love it." Larry Ellis/Daily Express/Hulton Archive/Getty Images hide caption

December 7, 2021 • Brooks wrote countless edgy jokes over the years, but he doesn't regret any of them. He calls comedy his "delicious refuge" from the world. "I hide in humor," he says. His new memoir is All About Me! 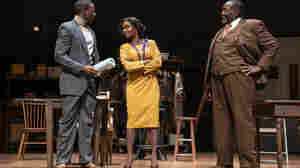 December 6, 2021 • Playwright Alice Childress took an unflinching look at racism in society and in the theater with "Trouble in Mind" in 1955. Now in its overdue Broadway premiere, the play proves prescient and timely. 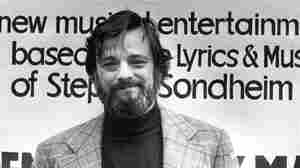 December 1, 2021 • Sondheim, who died Nov. 26, was the lyricist and composer who gave us Sweeney Todd, Into the Woods and other shows. In 2010 he spoke about his writing process, from rhyming to finding the right note. 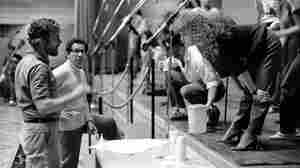 Bernadette Peters leans forward to discuss the recording of the "Sunday in the Park with George" album with Stephen Sondheim and producer Thomas Z. Shepard in June 1984. Marty Reichenthal/Associated Press hide caption 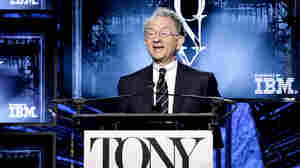 A prominent Broadway costume designer is accused of sexual abuse

November 16, 2021 • William Ivey Long is an iconic presence on Broadway, designing costumes for shows such as Diana: The Musical and Chicago. Now two men have accused the former Tony Awards chairman of sexual abuse.

A prominent Broadway costume designer is accused of sexual abuse 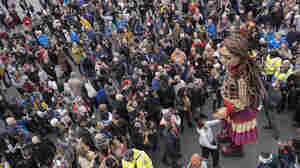 November 2, 2021 • Little Amal, a 9-year-old Syrian refugee puppet, has been walking across Europe to raise visibility and empathy for the plight of refugees. Theater director Amir Nizar Zuabi spoke with TED Radio Hour. 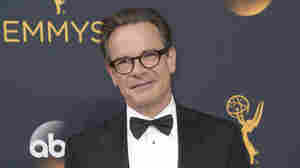 Peter Scolari, pictured at the 2016 Emmy Awards, has died at age 66. He was a versatile character actor. Richard Shotwell/Invision/AP hide caption 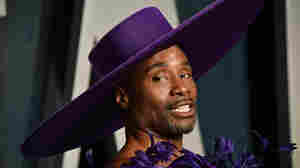 Billy Porter attends the 2020 Vanity Fair Oscar Party. "Fabulous and serious can go hand in hand. I am proof positive of that," he says. Frazer Harrison/Getty Images hide caption

Billy Porter makes peace with himself: 'I set myself free, honey. No more secrets'

October 19, 2021 • Fourteen years after his initial diagnosis, the Pose actor revealed publicly that he is HIV-positive. Porter says being open about his health status felt like a rebirth. His new memoir is Unprotected.

Billy Porter makes peace with himself: 'I set myself free, honey. No more secrets' 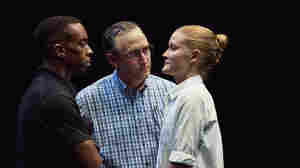 October 12, 2021 • Is This a Room is based entirely on the transcript of the FBI interrogation of Reality Winner, the former NSA contractor who was imprisoned for leaking classified information. 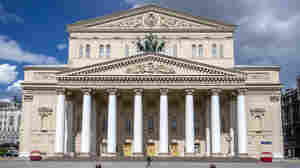 A performer was killed Saturday during a performance at the Bolshoi Theatre in Moscow, pictured here in a May 2020 photo. YURI KADOBNOV/AFP via Getty Images hide caption

October 10, 2021 • Video shows the actor being crushed by a piece of the set during a scene change, as his fellow performers frantically waved their arms to get the crew to lift the structure off of him.