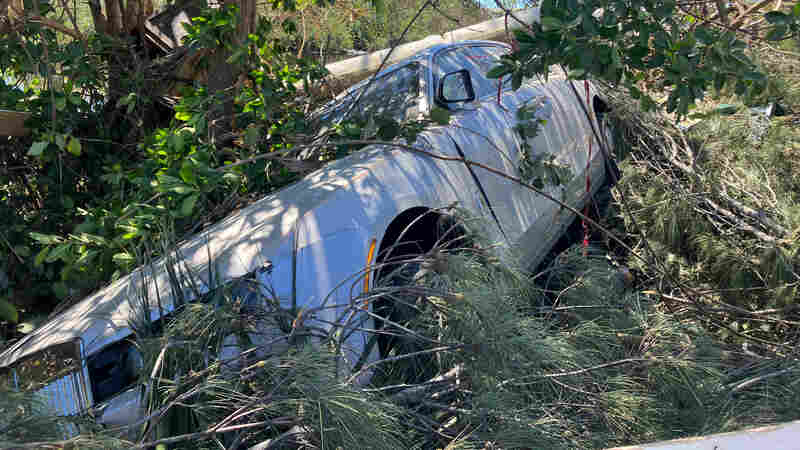 A Rolls Royce swept into the mangroves in Bonita Springs, south of Cape Coral, on Sept. 30, 2022. Scott Neuman/NPR hide caption

In the wake of Hurricane Ian's destruction, Floridians are picking up the pieces

October 1, 2022 • Days after Category 4 Hurricane Ian came ashore near the tony seaside community, residents are taking stock and trying to put their lives back together.

In the wake of Hurricane Ian's destruction, Floridians are picking up the pieces 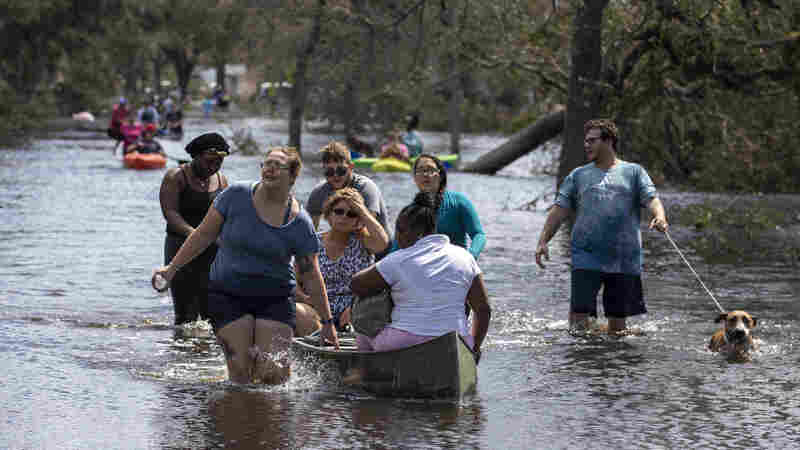 How local and national leaders are tested by major natural disasters

October 1, 2022 • If handled well, storms like Hurricane Ian can cement politicians' images as community leaders — competent and trusted to help constituents get what they need. If mishandled, they can mar legacies. 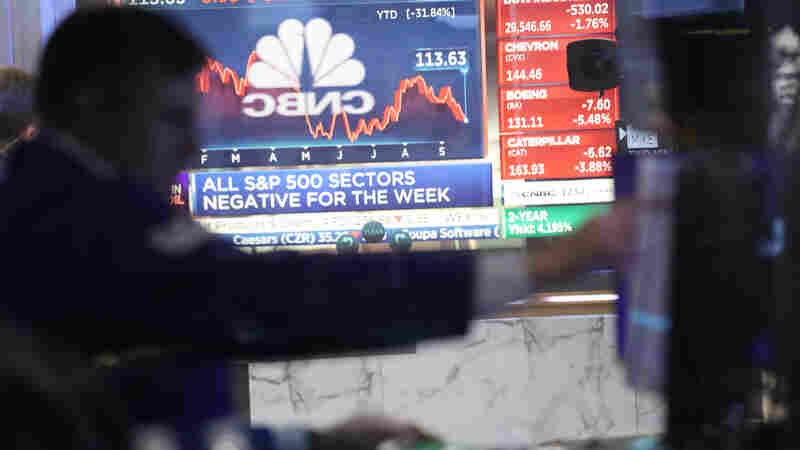 A bad year for Wall Street gets even worse, as stock markets finish September down

October 1, 2022 • Amid heightened uncertainty about the global economy, all three U.S. indexes are in a bear market as the third quarter comes to a close.

A bad year for Wall Street gets even worse, as stock markets finish September down

Got A News Tip?

At NPR, we welcome your news tips. Here's a guide to getting in touch with our newsroom and how to share sensitive information. 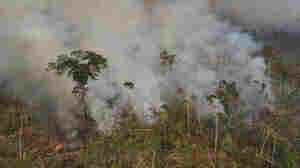 A large fire in a recently deforested area of the Amazon rainforest along Highway BR-319 in the state of Amazonas, Brazil, on Sept. 25. Bruno Kelly for NPR hide caption

October 1, 2022 • Under President Jair Bolsonaro, who is running for reelection in Sunday's vote, forest clearing and wildfires have surged in the Amazon. 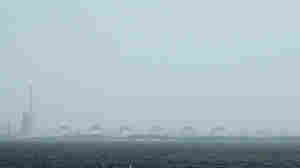 A view of the Zaporizhzhya nuclear plant and the Dnipro river on the other side of Nikopol, Ukraine, on Aug, 22, 2022. Evgeniy Maloletka/AP hide caption 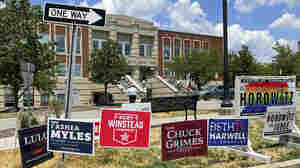 Campaign signs are posted outside a polling location on the first day of early voting on July 15 in Nashville, Tenn. Jonathan Mattise/AP hide caption

Campaign signs influence how we vote more than you might realize

October 1, 2022 • Especially in local races, political signs can drive name recognition in important ways. In one study, they even helped elevate a fictitious candidate to near the front of the pack. 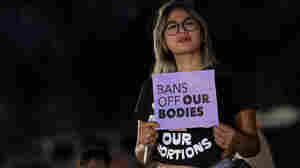 Celina Washburn protests outside the Arizona Capitol to voice her dissent with an abortion ruling, on Sept. 23, 2022, in Phoenix. Matt York/AP hide caption

October 1, 2022 • An Arizona judge on Friday declined to put her order that allowed enforcement of a pre-statehood law making it a crime to provide an abortion on hold. 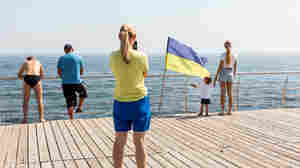 Tourists by the boulevard at a Black Sea resort in Odesa, Ukraine, on Sept. 3. Tourists are not allowed to enter the public beach due to the presence of land mines and other explosives. Dominika Zarzycka/NurPhoto via Getty Images hide caption

With Ukraine at war, officials hope to bring tourism back to areas away from fighting

October 1, 2022 • The war displaced millions of Ukrainians. But officials are trying to entice citizens to travel around the country for pleasure again.

With Ukraine at war, officials hope to bring tourism back to areas away from fighting 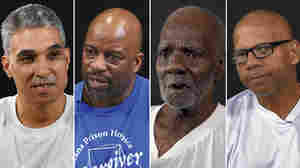 October 1, 2022 • When Calvin Duncan was 19 years old, he was arrested for a murder he didn't commit. Now, he's helping to tell the stories of other men who have found themselves behind bars for life. 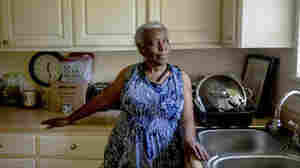 October 1, 2022 • Residents in the predominantly Black city confront chronic water system outages that have them finding ways to function without a basic public service – safe and reliable drinking water. North Korea conducts 4th round of missile tests in 1 week In this aerial photo made in a flight provided by mediccorps.org, damage from Hurricane Ian is seen on Estero Island in Fort Myers Beach, Fla., on Friday. Gerald Herbert/AP hide caption

Dozens are dead from Ian, one of the strongest and costliest U.S. storms

October 1, 2022 • The powerful storm terrorized millions for most of the week, hitting western Cuba before raking across Florida and then South Carolina. 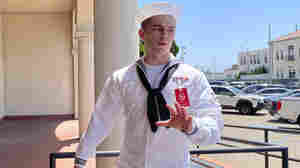 September 30, 2022 • A military judge on Friday acquitted a sailor of arson in a fire that destroyed the USS Bonhomme Richard, a blow to the Navy as it faces allegations of improper training and maintenance of the ship. 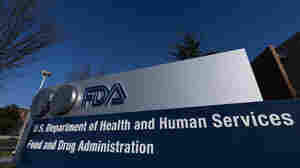 A controversial new drug for ALS that just received FDA approval could add months to patients' lives, but some scientists question whether it actually works. Manuel Balce Ceneta/AP hide caption

September 30, 2022 • A controversial new drug for ALS could add months to patients' lives – if it actually works A firefighter examines a large tree across a road as the effects from Hurricane Ian are felt in Charleston on Sept. 30. Alex Brandon/AP hide caption

Photos: Here's what Ian looks like in South Carolina 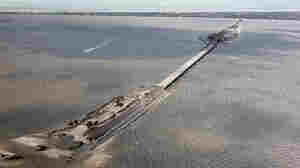 In this aerial photo taken in the aftermath of Hurricane Ian on Thursday, parts of the Sanibel Causeway are washed away along with sections of the bridge. Joe Raedle/Getty Images hide caption

September 30, 2022 • Hurricane Ian washed away several portions of the Sanibel Causeway, a series of bridges linking the island to the rest of the state. It will require structural rebuilds, Florida's governor says. September 30, 2022 • Breanna Stewart and the United States used a dominant defensive effort to beat Canada and reach the gold-medal game of the World Cup for the fourth consecutive tournament. 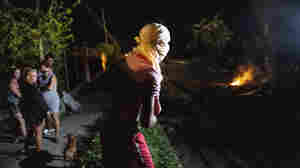 People in Bacuranao, Cuba, protest on Friday, asking for the restoration of the electrical service that collapsed due to the devastation of Hurricane Ian. Ramon Espinosa/AP hide caption

September 30, 2022 • The power outage caused by the storm prompted protests in the streets of Havana as several hundred people demanded restoration of electricity more than two days after a blackout hit the entire island. 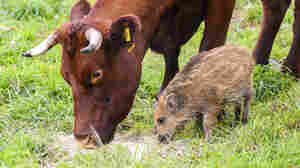 Wild boar Frieda eats next to a cow Thursday in a pasture in Holzminden, Germany. Julian Stratenschulte/AP hide caption

September 30, 2022 • Wild boars have a reputation for destruction, but farmer Friedrich Stapel told a news agency that he can't bear to chase away the piglet, which he's named Frieda. It'll winter with his mother cows.