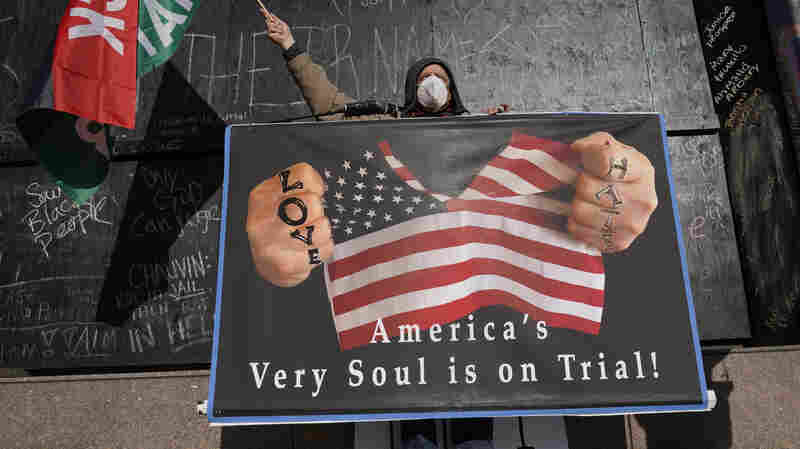 A protester stands across the street from the Hennepin County Government Center on Tuesday, where former Minneapolis police officer Derek Chauvin stands trial for the death of George Floyd. Jim Mone/AP hide caption

April 18, 2021 • The former Minneapolis police officer faces manslaughter and murder charges in George Floyd's death. The prosecution and defense get one last chance to be heard before the jury begins deliberation. 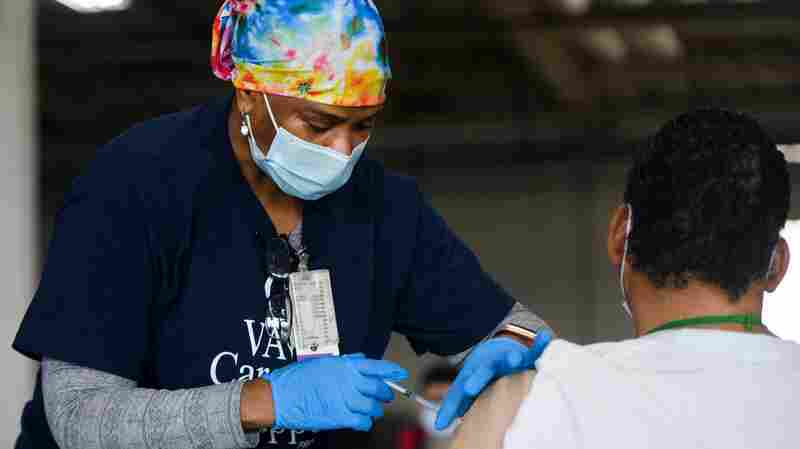 More Than Half Of U.S. Adults Have Gotten At Least One COVID-19 Vaccine Dose

April 18, 2021 • The CDC reported a hopeful statistic in the country's fight against the coronavirus on Sunday. On Monday, every adult in the country will be eligible to register to be vaccinated. 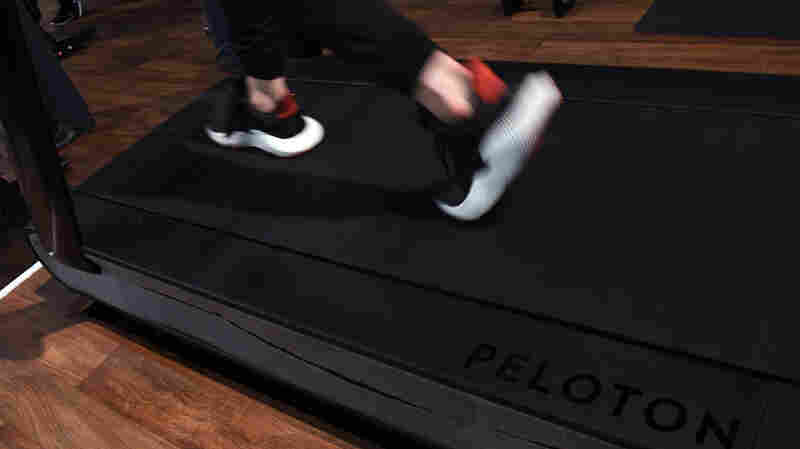 April 18, 2021 • The U.S. Consumer Product Safety Commission has issued a warning about the Peloton Tread+ after reports of children being injured. Peloton insists the machine is safe when used as directed. 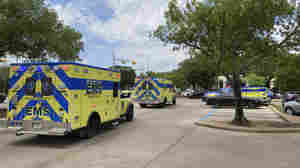 Weekend Shootings In Texas And Wisconsin Add To Tally Of U.S. Gun Deaths

April 18, 2021 • After a big surge in gun deaths in 2020, high-profile mass shootings this spring are a reminder that America's epidemic of gun violence persists. 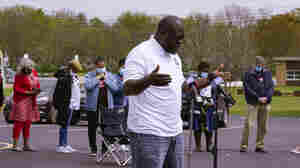 Pastor Denell Howard leads a prayer Saturday at a vigil at Olivet Missionary Baptist Church in Indianapolis for the victims of the shooting Thursday at a FedEx facility. Michael Conroy/AP hide caption

April 18, 2021 • The weapons used in Thursday's mass shooting at a FedEx facility were purchased legally by the suspect in July and September of 2020, police said. A shotgun was seized from him earlier. 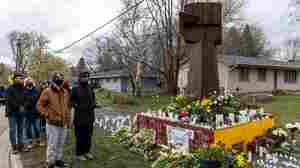 Mourners have built a makeshift memorial for Daunte Wright on the streets of Brooklyn Center, Minn., the quiet inner-ring suburb where police shot and killed Wright on April 11. Kerem Yucel/AFP via Getty Images hide caption

Brooklyn Center, Minnesota's Most Diverse City, Is In The Spotlight After Shooting

April 18, 2021 • The inner-ring suburb where Daunte Wright was shot by police has diversified dramatically over the last 30 years. Its city administration — and police force — have been slower to change. 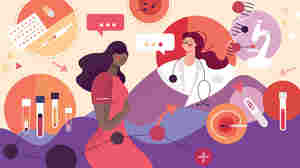 OPINION: Doctors Should Be More Candid With Their Patients

April 18, 2021 • As a doctor, I was eligible for the COVID-19 vaccine in December, but I also was pregnant, and there wasn't yet much data to inform my decision. What I needed was a different kind of information. 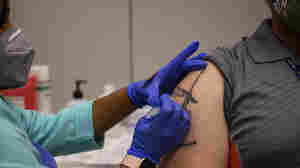 A Georgia Tech employee receives a Pfizer coronavirus vaccination on the campus April 8. For a number of Americans, getting their shots is as easy as showing up to their workplace as some companies and institutions provide on-site vaccinations to their employees. Danny Karnik/AP hide caption

For Some Americans, Getting A Vaccine Is As Easy As Showing Up To Work

April 18, 2021 • Companies like Tyson and Amazon are offering on-site coronavirus vaccinations to their employees in order remove barriers to getting the shots.

For Some Americans, Getting A Vaccine Is As Easy As Showing Up To Work 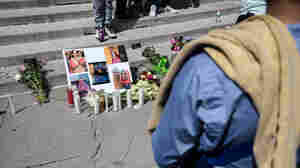 A woman views a collage of photos of Amarjeet Johal during a vigil at Monument Circle on Sunday in Indianapolis. Four of the people killed in the mass shooting were members of the Sikh community. Jon Cherry/Getty Images hide caption

Indianapolis Sikh Community Mourns 4 Of Its Members Killed In Shooting

April 17, 2021 • "These kinds of violent attacks are a threat to all of us," said community member Maninder Singh Walia. The gunman's motive in attacking a FedEx warehouse on Thursday night is still unknown. 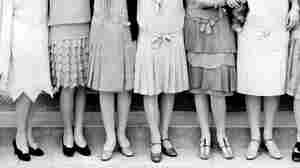 Young people today are getting ready to make the most of their youth by partying like these young women did back in the 1920s. Kirn Vintage Stock/Getty Images hide caption

April 17, 2021 • With the end of the pandemic possibly approaching, young Americans are getting ready to make up for lost time and lost partying, much like their great-grandparents did a century ago. 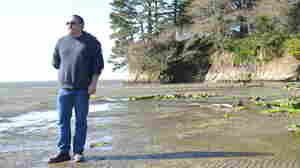 Tony Johnson is chair of the Chinook Indian Nation, a federally unrecognized tribe. He stands on a Willapa Bay, Wash., beach, where he got married and not far from where his ancestors lived. Eilis O'Neill/KUOW hide caption

April 17, 2021 • Many federally recognized tribes throughout the U.S. have had great success vaccinating their members against COVID-19. But those without federal recognition say they have a very different story. 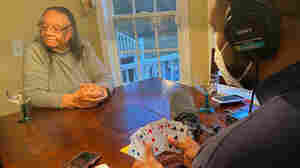 Molly Garris, 94, moved in with one of her daughters during the pandemic. The move has meant she's able to enjoy a game of spades, one of her favorite pastimes, with her family, including her grandson-in-law, All Things Considered producer Jason Fuller. Carolyn Dixon hide caption

For Seniors Looking To Stay Sharp In The Pandemic, Try A Game Of Spades

April 17, 2021 • Most families have a tradition when everyone gathers. In the South, that tradition often involves a game of spades. And playing during the pandemic can help seniors stay sharp and mentally stimulated.

For Seniors Looking To Stay Sharp In The Pandemic, Try A Game Of Spades 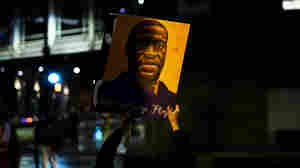 April 16, 2021 • Derek Chauvin's defense has suggested George Floyd's drug use might have made him more "volatile" and unpredictable, justifying the use of force. Critics say Floyd needed health care and compassion. 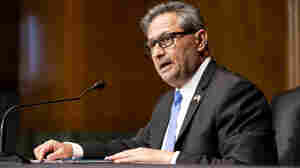 All Federal Inmates To Be Offered Vaccine By Mid-May, BOP Director Says

April 16, 2021 • A third of people held in federal prisons have received the vaccine already. But federal inmates make up just 10% of people incarcerated in the U.S. For others, vaccine timing is uncertain. 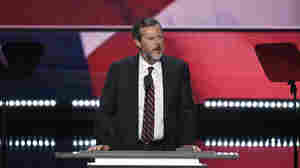 April 16, 2021 • In the civil suit, Liberty University accuses its former president of breach of contract and fiduciary duty as well as statutory conspiracy. Falwell called it "full of lies and half truths." 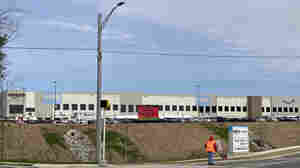 Workers at Amazon's facility in Bessemer, Ala., held a historic vote on whether to form the company's first warehouse union. Bill Barrow/AP hide caption

April 16, 2021 • A movement to unionize workers at an Amazon warehouse in Bessemer, Ala., was seen as a potential turning point for the American labor movement. But the effort failed resoundingly. Stephan Bisaha of member station WBHM in Birmingham examines why. 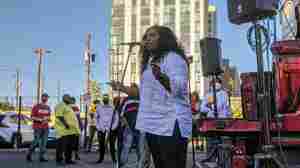 April 16, 2021 • The resounding vote against forming a union at an Amazon warehouse in Alabama is a blow to the labor movement. It has glimmers of hope but in the private sector unions are rare and mostly weak. 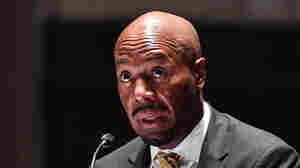 April 16, 2021 • Those who don't immediately stop for police are committing "contempt of cop. And bad officers will make you pay for that," law professor Paul Butler argues. 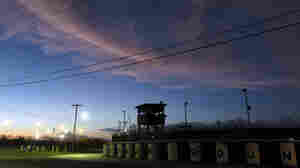 In a letter to the White House, 24 senators said the U.S. military prison at Guantánamo Bay, Cuba "has damaged America's reputation, fueled anti-Muslim bigotry, and weakened the United States' ability to counter terrorism and fight for human rights and the rule of law around the world." Maren Hennemuth/picture alliance via Getty Images hide caption

Senators Urge Biden To Shut Down Guantánamo, Calling It A 'Symbol Of Lawlessness'

April 16, 2021 • Two dozen U.S. senators sent a letter to the White House outlining steps to shutter the crumbling military prison in Guantánamo Bay, Cuba, where many men have been held uncharged for nearly 20 years.

Senators Urge Biden To Shut Down Guantánamo, Calling It A 'Symbol Of Lawlessness' 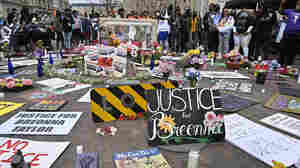 Protesters gathered at a memorial a Louisville, Ky. park on March 13, 2021, the anniversary of Breonna Taylor's killing. Jonathan Mattingly, one of the officers involved in the fatal raid, is facing widespread criticism for planning to publish a book about it. Timothy D. Easley/AP hide caption

April 16, 2021 • Sgt. Jonathan Mattingly is writing a book about the botched raid, during which he shot into Taylor's apartment after being wounded. Post Hill Press says it will move forward with its plans to publish. 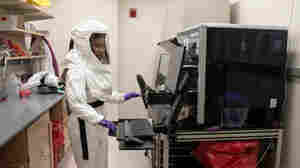 April 16, 2021 • With a more contagious variant now dominant in the U.S., the country's genomic surveillance capacity is getting a major boost. 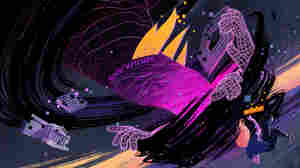 An NPR investigation into the SolarWinds attack reveals a hack unlike any other, launched by a sophisticated adversary intent on exploiting the soft underbelly of our digital lives. Zoë van Dijk for NPR hide caption

A 'Worst Nightmare' Cyberattack: The Untold Story Of The SolarWinds Hack

April 16, 2021 • Russian hackers exploited gaps in U.S. defenses and spent months in government and corporate networks in one of the most effective cyber-espionage campaigns of all time. This is how they did it. 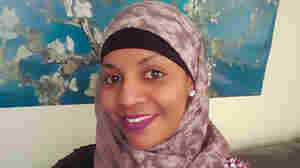 Najat Hamza had been living in the U.S. for almost two decades after fleeing Ethiopia's regional state of Oromia when she was young, she told StoryCorps in 2017. "My heart will always belong to Oromia," she said. Najat Hamza hide caption

An Ethiopian American Refugee Longs For Her Homeland

April 16, 2021 • As a young teen, Najat Hamza fled Oromia, a regional state of Ethiopia, with her father to live in America. At StoryCorps, she spoke about what it means to leave "the familiar" behind.

An Ethiopian American Refugee Longs For Her Homeland 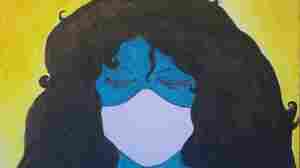 Ciera Amaro's art is one of the submissions to a project called Dispatches from Quarantine. Ciera Amaro via Alexandra Zapruder hide caption

Dispatches From Quarantine: How Young People Are Documenting History

April 16, 2021 • Enticed by what young adults had to share about the pandemic, historian Alexandra Zapruder set out to document history through an online gallery called Dispatches from Quarantine.

Dispatches From Quarantine: How Young People Are Documenting History 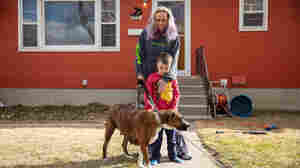 Barbara Gaught stands outside the home she's now renting in Billings, Mont., with her 5-year-old son, Blazen, and their dog, Arie. Gaught and her family were evicted from the mobile home they had owned outright and lived in for 16 years because they fell behind on 'lot rent' for the little plot of land under the mobile home. Louise Johns for NPR hide caption

Losing It All: Mobile Home Owners Evicted Over Small Debts During Pandemic

April 16, 2021 • Mobile home owners right now are twice as likely as other homeowners to be behind on housing payments. And some are losing their homes over small amounts of rent they owe for land the home sits on.

Losing It All: Mobile Home Owners Evicted Over Small Debts During Pandemic